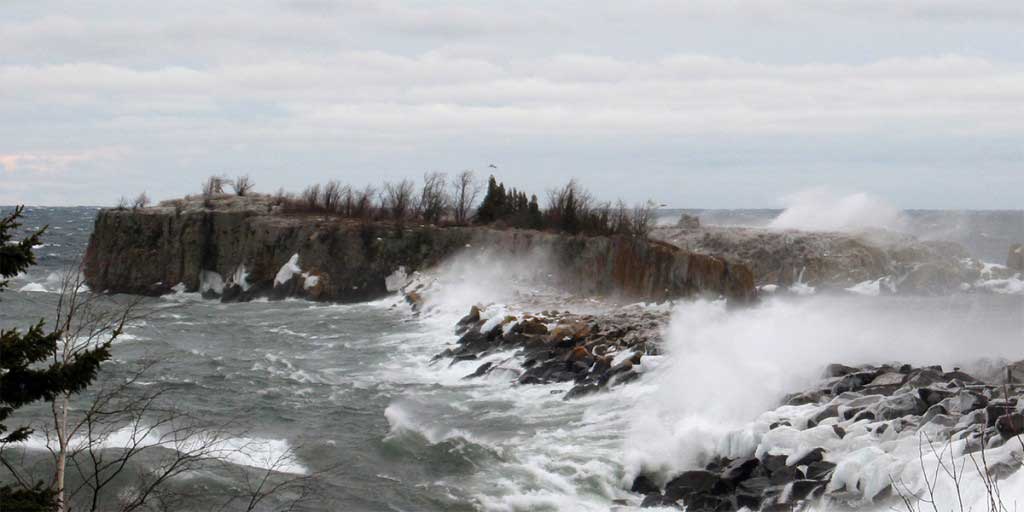 All over the Great Lakes, wooden schooners were colliding, breaking away and sinking. Others were destroyed by fire. Actually, it wasn’t usually the dark, stormy nights, but the inexperienced crews that caused most of the shipping accidents in the late 1800s. However, Lake Superior shipwrecks continued well into the late 1900s.

Horrific shipwrecks and terrific rescues occurred throughout the shipping season across Lake Superior. Wrecks were most numerous off the Keweenaw Peninsula in Upper Michigan, at ports, and in the waters surrounding Isle Royale. Much of the shipping traffic along the North Shore included passengers as well as cargo, since no roadways existed northeast out of Duluth.

The Wreck of the Hadley & Wilson

Major shipwrecks and numerous fires, collisions and sinkings took place in the vicinity of the Duluth harbor. One of the two worst wrecks in Duluth history happened on June 7, 1902. The morning was calm and clear as the 288-foot wooden ship George G. Hadley steamed inbound toward the Duluth Ship Canal. Meanwhile the 308-foot steel whaleback Thomas Wilson steamed out of the harbor into the canal. (Remember only the canal existed; no bridge had been erected yet.)

A half mile off the piers, the Hadley was directed by the tug Annie L. Smith to enter the Superior harbor. The Hadley captain changed course to the left without blowing the required whistle signals or noticing the Wilson coming down the canal. The Wilson captain attempted a starboard (right) turn, since a port turn would have stranded the ship. Neither captain was able to turn sharply enough. Hadley’s wooden prow drove hard into the whaleback’s steel side. Within three minutes, the Wilson rolled, tipped bow (front) down and dove to Superior’s bottom, taking nine men with her. The Hadley rescued the remaining Wilson crew before staggering off to the sandy beach south of the canal where she sank. The Hadley crew and Wilson survivors made it to shore safely. Any remnants of the Hadley and Wilson remain today on the lake bottom.

The Wreck of the Ely (& Hesper)

The port of Two Harbors has had its share of beachings and accidents, too. The most famous incident took place October 30, 1896. A Duluth cargo freighter, the Hesper, was towing a converted three-masted schooner, the Samuel P. Ely to Two Harbors. Both vessels withstood the roaring squall and entered the harbor.

The towline either broke or was cast off too soon, and the 200-foot Ely was rammed first into a docked scow, then the western breakwall. As the tug Ella G. Stone approached, the Ely began breaking up. The tug was able to retrieve the crew and two men from the scow. The Ely settled to the harbor bottom and eventually became part of the new western breakwater. In 1962 divers found the Ely in about 30 feet of water. Since she was well preserved, they started a diving service that took folks to the wreck and allowed divers to keep one set of dishes. A skeptical journalist made the dive, collected his set of dishes and exposed the service for planting dishes from Goodwill onboard the Ely. The diving service quickly folded, but the Ely remains one of the most-visited wrecks, safe within the harbor refuge.

The Hesper’s luck held for the next eight and a half years. Then the 250-foot wooden steamer was driven off course during a spring nor’easter on May 3, 1905. Waves from the 60-mile-an-hour winds hurled the Hesper onto a reef southwest of present-day Silver Bay. Another wave hoisted the steamer over the reef, dropped her and smashed her to bits in 42 feet of water. The crew was able to save themselves on lifeboats.

The Wrecks of the Madeira & Edenborn and the Lafayette & Manila

One blizzard cost the Pittsburgh Steamship Company two men and four ships. On November 28, 1905, the 478-foot iron ore carrier William Edenborn was towing the 436-foot barge Madeira in the early-morning hours of the storm.
About 3:00 A.M. the towline parted. The unpowered Madeira floundered and crashed into the craggy rock shores of Gold Island, near modern day Split Rock Lighthouse. As the barge broke in two, nine of the ten crew made it safely to shore. One man died. At about the same time, the Edenborn was whipped into the mouth of the Split Rock River. With her bow driven into the wooded shoreline, her stern in the lake, and the waves pounding, the Edenborn split in two. One crew member perished. The Edna G. provided life saving services to both crews.

Twenty miles to the southwest, two sister ships were experiencing similar fates. The steel steamer Lafayette was towing the 436-foot barge Manila. Darkness and ceaseless sheets of snow combined for zero visibility. The captain had no idea where they were until he heard breakers hitting shore on the starboard side. A few moments after this realization, waves smashed the 454-foot Lafayette into massive rocks fifty feet offshore. With no time to react, the Manila drove into the Lafayette’s stern, busting her in two in minutes. Both crews made it safely to shore. The cliff the ships rammed into has been named Lafayette Bluff, (the site of the northeastern tunnel on Highway 61). The casualties and wrecks of this storm precipitated the building of the lighthouse at Split Rock.

Since 1930, only seventeen major ships have been lost. The loss of the iron ore carrier Emperor on the dawn of June 4, 1947 was a shock.

Rounding the northwest end of Isle Royale in near zero visibility, the 525-foot, 4,641 ton-steamer smashed into Canoe Rocks with such terrific impact that she split at Hatch No. 4. A Coast Guard cutter four miles away responded to the first SOS, saving twenty one sailors. Twelve men drowned and the Emperor sunk to depths of 140 to 180 feet.

Seventeen more lives were lost when 427-foot Henry Steinbrenner went down May 11, 1953. The iron ore carrier had left Duluth on Saturday, May 9 under sunny 78 F skies. Sunday temps rose to 65 F, but by evening incredible gales gusting up to 72 miles per hour created 19-foot high waves. During the night, temperatures dropped, blinding snow came up and gale winds ripped off three sternward hatch covers. At 6:30 A.M., she foundered. Distress signals brought in other ships, which rescued fourteen crew members aboard three life vessels.

The Steinbrenner was the last of the North Shore wrecks.

On November 10, 1975 the world was astonished by the loss of the Fitz. Seventeen miles from Whitefish Point, Michigan, the 729-foot Edmund Fitzgerald vanished at sea amidst hurricane winds and a magnificent storm. All twenty nine crew members and the eight-million-dollar ship were lost.

Superior’s latest claim was the U.S. Coast Guard cutter Mesquite on December 4, 1989 off Keweenaw Point, Michigan. Shipwrecks are not a thing of the past.